As we approached the Zürich Hotel Engimatt, I recognized Jakob Kumoch, the Polish Ambassador to Switzerland, just getting out of his van with his staff. We were early so Dave and I slowed our pace hoping to greet him inside instead of on the sidewalk. Mr. Kumoch turned around, saw us, said my name, and put his arms out to embrace me. The ambassador walked us inside to the reception introducing us to his wife, staff, the Hon. Consul Markus Blechner, relatives of Konstanty Rokicki and Aleksander Łados, and the families of other Holocaust survivors. We were all there to meet each other before going to the afternoon ceremony honoring Rokicki.

You may be asking yourself, “Who was Konstanty Rokicki?” Recently Mr. Kumoch and his associates uncovered an archive that proves a joint Polish-Jewish rescue operation. During WWII the Polish government was in exile in London, but they maintained an embassy in Bern, Switzerland. Aleksander Łados, Konstanty Rokicki, Juliusz Kühl, Stefan Ryniewicz, Abraham Silberschein, and Rabbi Chaim Eiss (now known as the Bernese Group or the Łados Group) were purchasing blank passports from the Paraguayan embassy, filling in information of Jews and their families, and sending them to various ghettos and camps. Hundreds of Jews were saved in this way as the Nazis gave South American Jews preferential treatment with the plan of using them to exchange for German POWs. My mother and her family were partially saved by a passport that Konstanty Rokicki filled in with his own hand.

The passport survivors and their families at the breakfast in Zürich were from Canada, Israel, and the USA. Before WWII their families had lived in Holland, Belgium, Poland, and Germany. Very quickly the formal introductions turned into lively conversations with everyone exchanging stories about what they knew about their family’s Paraguayan passport, how they learned the story and, most importantly, how they survived. 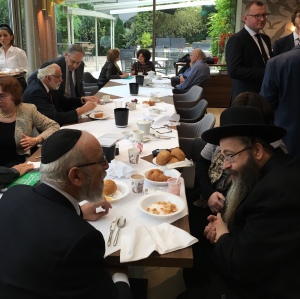 I had brought with me several documents, including my grandfather’s Paraguayan passport and a letter of notarizarion stating the fake passport was real. I showed these documents to Ambassador Kumoch and the other Polish representatives and they were clearly moved. Over and over the same scene played out in the room: a document, a survivor, a family, a story. Here was proof — not just on paper, but living proof — that the Polish government of the 1940s had done something right. They had tried and succeeded in saving lives. The families here in this room represented Jewish life and the continuation of the Jewish people. Our stories were powerful and the ambassador listened to them with reverence.

When I showed Mr. Kumoch the small slip of paper my grandfather was given when he presented his passport and was withdrawn from the train to Auschwitz while approximately 1500 other Jews were sent to their deaths, he started to tear up and turned away to compose himself. His work over the last 18 months certainly was not as momentous as that of his predecessors, but he was grateful to be able to bring the story to light.

7 thoughts on “Breakfast with the Ambassador”