While I was visiting my parents recently I took a few minutes to look at the bookshelf in their living room. There is a section on sailing for dad and The Complete Works of Shakespeare. There are atlases and dictionaries and several art books of the great masters. And then there is The Holocaust shelf. Books in dark bindings with imposing bold typeface. Books that have been there my whole life. Books that I have looked through many, many times.

This time I reached for a book I had never bothered with before. Maybe because it was in Dutch, it had never caught my eye. However, with all my recent research and last year’s visit to Holland I have picked up a smattering of the language. I picked up the small paperback volume titled Het Derde Rijk en de Joden (translated: The Third Reich and the Jews).

I opened the book carefully and started to leaf through it. The cover immediately ripped as it has been sitting untouched for so long. It was published in 1956. The edges of the pages are starting to yellow. A folded paper fell from between the pages. It read Theresienstadt als Alibi (translated: Theresienstadt as Alibi). No date but a four page spread from an old newspaper highlighting a new book by H. G. Adler about Theresienstadt that was published in 1958. Probably the last time this book had been opened.

1958 was the year that Elvis was inducted into the Army and Khrushchev became Premier of the Soviet Union. More importantly, it was the year my parents got married. I am trying to put all this in perspective as I assume my mother was a little too busy to pay attention to the books and articles her mother was collecting.

The page that the Theresienstadt article was tucked into has an exclamation mark in the margin. It is my grandmother’s exclamation mark. I can recognize her handwriting. It is marking a paragraph that is the transcript of the same document I had found in the Yad Vashem archives two and a half years ago in which Eichmann’s office refuses to leave my grandfather in the Netherlands even though the Department of Armaments and Munitions requested it. This is where my research began.

Over the last couple of years I have wondered if my grandparents fully understood what had happened behind the scenes as they did their best to survive the Holocaust with their family intact. Did they know the importance of my grandfather’s connections in the metal industry? Did they know that top Nazis were arguing about whether he would live or die?

I found my answer – and to paraphrase L. Frank Baum – I didn’t have to look any further than my own childhood home. The answer was on the bookshelf all the time.* They knew. Maybe my mother hadn’t picked up the full story as a child and maybe she didn’t pay attention to it the year she was planning a wedding. But my grandparents knew. And they were strong enough to not let it ruin their lives in 1943 or in 1958. I know they enjoyed their daughter’s wedding. I have a picture to prove it. 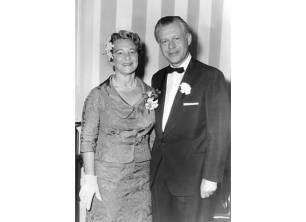 *“If I ever go looking for my heart’s desire again, I won’t look any further than my own backyard.” Dorothy in The Wizard of Oz, 1939

4 thoughts on “Under My Nose the Whole Time”