I went to two Yom HaShoah (Holocaust Remembrance Day) events in April and I noticed that different communities handle this important day in different ways. Each has a different tone and audience but essentially accomplishes the same thing.

I watched University of New Haven students do a short performance of Pavel Friedmann’s poem Butterfly. I sat with a small Vermont Jewish Community while we watched a video of Elie Wiesel describing what it was like to go back to his home town of Sighet, Romania twenty years after the war. And I spoke with academics, other children of survivors, and survivors themselves.

What do all these events have in common? They all light candles in remembrance of the murdered. They all respect the solemnity of the day and talk about the need to remember the past so as to put an end to bigotry now and in the future.

I have been invited to speak at a Yom HaShoah event in 2018. I am wondering what I might add to the conversation one year from now. I might tell my mother’s story of surviving Westerbork and Theresienstadt. I might discuss my grandfather’s acts of resistance through the metal industry. I might talk about my drive to write Tutti’s Promise. Whatever I do say, I hope I will inspire individuals in that community to move forward through their day or week or lifetime with an attitude of not just tolerance, but acceptance. This is an awesome task I have ahead of me and I hope I will be able to do it justice.

This week I received a letter from the United States Holocaust Memorial Museum. It isn’t personal. It is a form letter that I assume was mailed out to everyone on their mailing list. Here is the text of the letter:

Dear Ms. Fishman,
Each year, the United States Holocaust Memorial Museum, by congressional mandate, leads our nation in commemorating the victims of the Holocaust at Days of Remembrance activities around the country.
Since the Museum’s opening in 1993, every US president has participated in this commemoration, a testament to our government’s bipartisan commitment to Holocaust education and remembrance. President Trump continued this important tradition, joining his predecessors Presidents Clinton, Bush and Obama in paying tribute to Holocaust survivors and victims. In the grandeur of the US Capitol Rotunda, the president affirmed the work of the Museum and strongly repudiated antisemitism, Holocaust denial, and hate in general.
These are the issues the Museum works on tirelessly every day thanks to your support. We reach millions of people worldwide through our multilingual website and educational activities that have a direct impact on how the lessons o the Holocaust are taught, learned, and acted upon.
Thank you for your steadfast commitment to our mission.
Sincerely,
Sara J. Bloomfield
Director 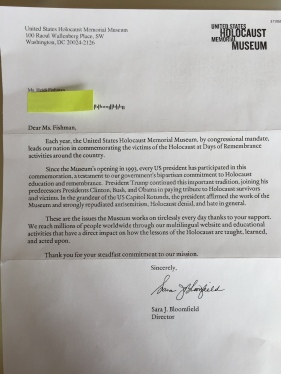 year that I remember a letter pointing out that the current president participated? Is it because this is the first year since the USHMM was established that we have a president who embraces the opinions of a known white supremacist? Is it because this is the first president since 1993 whose campaign was at times filled with hatred and whose commitment to fighting bigotry is in question? I can’t help but wonder if the current administration requested, or more likely demanded, that the USHMM send out a letter noting that the president participated because they know he has a problem. His actions do not demonstrate that he is accepting of all people, nor do they show that he hates bigotry. In fact, he has actually seemed to promote it.

I certainly won’t be asking the community where I speak next year to send a follow up letter to everyone they know stating that Heidi Fishman repudiates antisemitism and bigotry. I don’t need to have anyone point out my words, because my actions speak for themselves.