January 17, 2014 we gathered at the church in Tilburg again. Coffee, tea and cookies were available along with the usual friendly atmosphere that the Dutch seem to delight in. Once everyone had gathered, about 50 people, we all put on our coats and wandered over to Bobby and Tineke’s old house. 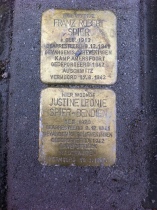 I noticed that the neighborhood was nice. The lawns were kept up and many of the homes had small flower beds out front. Of course nothing was blooming as this was January. The sky was gray and it was cool, but at least it wasn’t raining. When we reached the house the group formed a small semicircle around the site of the stones.

Several people made short speeches. Cor Sinema introduced everyone, Arnold-Jan Bijsterveld explained the significance of placing the stones, Bob Bendien (nephew of Tineke on Bobby) made a few remarks, and I spoke briefly as well.

Then it was time to put the stones into the sidewalk. Mr. Bendien and I had the honor of setting and putting the cement in around the stones. As we did it I felt like I was at a funeral shoveling the dirt onto the casket. Bobby and Tineke didn’t have caskets. They didn’t have their own graves and they weren’t able to be laid to rest together as most married couples are. This was the best that could be done for them – two brass plaques in the sidewalk outside their former house seventy years after their deaths. It will have to do.

For those who would like to read more, here is what I said at the ceremony:

My mother is Franz Robert Spier’s niece. She would have liked to be here, but she wasn’t able to make it. She wanted me to tell you all that she is very moved that you are honoring her family today.

Instead, when I visited my grandparents and saw a portrait of a young boy hanging in their house, I had to ask who he was. All I was told was that he was my grandmother’s younger brother. His name was Bobby, and that he had been shot on the beach while trying to flee the Nazis. This is the story that my grandmother believed until the day she died.

Later, in the mid 90’s, my mother received information through the International Red Cross that Bobby had died in Auschwitz. The story my mother was told as a child and this information didn’t match up, but she didn’t question it.

About two years ago I decided to write a book about my mother’s childhood during the Holocaust. As I was searching the web for information, I came across the Joods Monument and a note from Arnoud-Jan Bijsterveld under the Spier-Bendien entry. From there it was only a few emails, and we learned that Bobby and Tineke, had been captured, imprisoned at Schveningen and later, he perished at Auschwitz and she at Mauthausen. I’m glad my grandmother never knew the truth. A quick death is somehow easier to hear than a torturous one.

I asked my mother to tell me about her Uncle Bobby. She was only seven-years-old when he was killed, but she remembers him very fondly. What I can tell you, is that he was the baby of the family and greatly loved. He was everyone’s favorite. He had an infectious smile and a gentle soul, and his death brought a great loss to his family. If things had been different, I may have grown up knowing my Uncle Bobby.

2 thoughts on “Laying the Stumbling Stones”