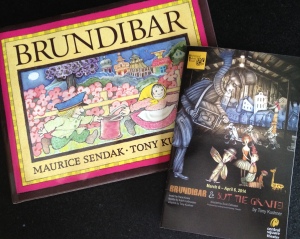 Yesterday I went to Boston to see the Central Square Theater production of Brundibar & But the Giraffe! The original opera was written in 1938 by a Czech composer, Hans Krasa with a libretto by Adolf Hoffmeister. Krasa, a Jew, was imprisoned at Theresienstadt and later murdered in Auschwitz. Hoffmeister survived the war, but died in 1973 being considered a “non-person” by the Soviet regime.

Brundibar was performed a total of 55 times by the Czech children in Theresienstadt, including one performance for the International Red Cross.

The story is a simple one. Mother wakes up sick. The children send for the doctor who prescribes good, wholesome milk for Mommy. Father has died long ago and the children know it is up to them to get the milk for their ill mother. They run to town but have no money. When they try to earn money by singing the local organ grinder, Brundibar, who plays bad music but commands the town square, won’t let them sing in his territory and scares them away. A kindly group of talking animals come and convinces the children not to give up. They then enlist the help of 300 other children to come to their aid. Together the children are able to run the bullying Brundibar out of town, earn the money they need, and buy the healing milk for Mommy.

But the Giraffe! by Tony Kushner was a wonderful addition to Brundibar. It tells the story of a Jewish Czech family on their last day before being forced to leave their home during WWII. They are each allowed one suitcase. They have to go through all their belongings and decide what to bring with them. The young girl of 8 or 9 years old wants to bring her stuffed giraffe, but there is no room for it in the suitcase and for the musical score of an opera that her older brother wants to bring. The giraffe will bring the girl comfort, but the music will bring joy and hope to many. She keeps asking her parents and grandparents what is happening and why everyone is upset. They are torn over how much to tell her.

But the Giraffe! puts Brundibar into historical context. I thought of my mother’s family being forced to move several times during the war, each time to smaller and smaller accommodations and having to make the same decisions. Do you take the practical or the sentimental? Do you explain all to the children? Or do you make up a story to ease the reality of the situation? Do you pack solely for yourself, or do you pack things for the greater good of all?

Brundibar was certainly written as a political statement. It is a story of good triumphing over evil. I wondered how the Nazis felt about the imprisoned Jews singing their hearts out about the small children vanquishing the evil tyrant.

The wicked never win! We have our victory yet! Tyrants come along, but you just wait and see! They topple one-two-three! Our friends make us strong! And thus we end our song!

Did the Nazis not realize the message of the story? Did they not see that it gave both the performers and the audience hope and courage? Or were they so arrogant as to assume that even with hope and courage the Jews would never survive as a people and the Third Reich would be a reality forever? It is quite remarkable that they allowed and encouraged the show to go on in Theresienstadt.

There is a footnote to the opera. Even though the children are able to defeat the evil Brundibar, the ending of the play is ominous. Brundibar has a final monologue which he delivers on a blackened stage with only a flashlight lighting his face.

They believe they’ve won the fight, they believe I’m gone – not quite! Nothing ever works out neatly- Bullies don’t give up completely. One departs, the next appears, and we shall meet again my dears! Though I go, I won’t go far… I’ll be back. Love, Brundibar.

The closing line hangs heavily in the air as the show ends. Brundibar will be back. He has come back many times in the last 70 years since he was defeated on V-Day. He has shown up as Apartheid in South Africa and wearing the white hood of the KKK in the United States. Brundibar fed the Hutu majority in Rwanda in 1994, and he is part of the current crises in Syria and the Ukraine. He pokes at children and teens on the internet and encourages them to bully one another and put each other down for being gay or fat or simply “different.”

We are all still battling Brundibar. Don’t forget the message of Krasa and Hoffmeister: together we can defeat bigotry, but everyone has to join in the fight.

2 thoughts on “Bigotry, Bullies and Brundibar”