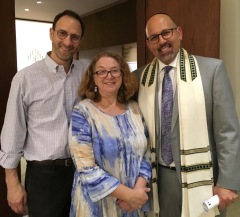 Over a year ago a classmate from Loomis-Chaffee, Jim Rice, invited me to come speak at his congregation. This week that invitation came to fruition as I spent three days at Temple Beth El in Bloomfield Hills, MI.

My visit started with a lovely lunch and a tour of the building. Temple Beth El is a beautiful space filled with so many friendly people. The Education Director (Debbie Morosohk), the Curator/Librarian (Laura Williams), Rabbi Mark Miller, Rabbi Megan Brundey, 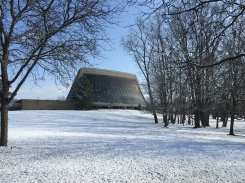 Cantor Rachel Gottlieb Kalmowitz, Security Personnel (Ken Jackson and Morris Collins), and Maintenance Personnel Victor Aguilar all made me feel as if I was a long missed friend who had returned after some time away.

I had the good fortune to meet many people in various venues. The teen group, that was learning about the Holocaust, listened politely as I explained how I unearthed my family’s story. The attendees at the book club meetings were filled with interest, questions, and stories of their own.

The Yom HaShoah/Holocaust Memorial Day service was the highlight of my visit. I told a shortened version of the Lichtensterns’ plight during the years from 1935-1945 while the congregation listened with head nods, knowing smiles, and a few tears. The service that followed was filled with just the right mix of sadness and hope. Cantor Rachel’s voice filled the chapel with a haunting sound as she sung Eli Eli and congregant Ken Posner followed with a rousing voice that called on a sense of resistance to evil as he sung The Partisan’s Song in Yiddish. Jordan Broder (whom I need to track down to see if he is related to Leon Broder – one of the “Metal Jews”) played a heartfelt rendition of Schindler’s Theme on the violin. The entire congregation joined in for the Mourner’s Kaddish in which the names of many of the death camps were inserted. I had never heard the Mourner’s Kaddish recited in such a way and my throat caught as I said “Theresienstadt,” “Birkenau,” “Bergen-Belsen,” and other places of torture, murder, and death. Rabbi Miller explained his choice of ending the service with the song Am Yisrael Chai. We all joined Cantor Rachel while she pounded her fist on the bema and our voices became louder, and more insistent, as we sang out words of hope.

If you would like to watch the service, it is available by clicking here.
(Please note the sound doesn’t pick up correctly until 3:45 into the video.)